What Happens To Your Testosterone Levels After 3 Weeks of NoFap?

A group of German dick doctors set out to answer the question we’d all been asking.

Everywhere you look all you can think about is sex.

A glimpse of your hot next door neighbours bare ankle - sex

Doris the elderly checkout clerk smiles at you - sex.

You even begin looking at the family dog in a different light...

You can’t even walk the streets anymore without feeling like a complete pervert. Pitching more tents than your old scoutmaster.

But what’s actually happening? Is it all psychological? Or does NoFap after 3 weeks actually have any physiological effects?

Basically what does NoFap after 3 weeks do to your test levels (and your gains) 🤔?

Well knowing that the question wasn’t going to answer itself a group of German Urologists (known affectionately as dick doctors in the medical community) set on to find out.

So it turns out that Germans love fapping. As such they only managed to recruit 10 participants into their NoFap trial, all men aged between 22-29.

All the men were in stable relationships and reported that they were having regular sex 2-3 times a week. Apart from one participant, Brad, who insisted that he had sex 2-3 times day and tried to make everyone high five him.

Before, during and after they reached climax the group of men had various measurements taken, including their testosterone levels.

On their return they were put in a room one-by-one and went through the same drill that they did at the start of the experiment (but this time after 3 weeks of abstinence).

They were made to wait a whole 10 minutes before they were allowed to engage in the self love they’d had neglected for the prior 21 days - while the German Dick Doctors definitely weren't watching on from the room next door.

When it was finally time they were given 10 minutes to blow their load but with typical German efficiency most men delivered a lot quicker.

They were then made to sit in the room in shame and wait for a futher 20 minutes while more measurements were taken before being let out at the 60 minute mark.

When they looked at the mens testosterone levels they found that they were very slightly higher after the 21 days of NoFap than they were when they first did the experiment. But after 10 minutes this suddenly changed... a lot.

So What Does It All Mean? 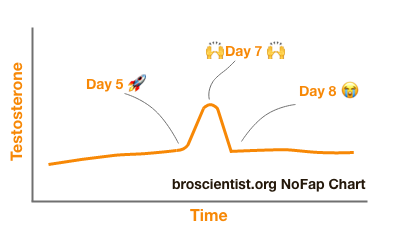 Wait... NoFap is evidence based??

Fish oil does what to your balls??